As a grand strategy mobile game, the scope of what players can do in CryptoCrusades is pretty expansive. It has been our goal to emulate the empire management strategies of our predecessors, such as Europa Universalis and Civilization, while condensing them into a simple formula that works for mobile gamers. In this blog post, we want to walk you through the different parts of our game and how they all come together in order to deliver a truly unique mobile strategy experience! 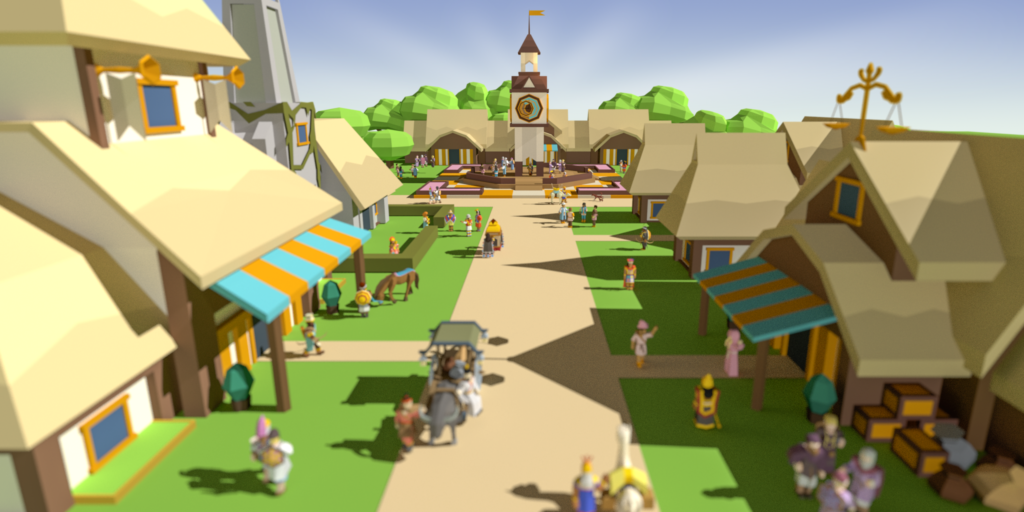 Players will be eased into their roles as Leaders at the beginning of the game while the three advisors, Cheng, Kate, and Femi, guide them through the basics of CryptoCrusades. These three will give you a mysterious tablet with which you can shape the future of your small village, transforming it into a great Capital City. Along the way, you’ll learn the basics of harvesting resources, upgrading buildings, and waging war against your enemies.

After the beginning tutorial, there will be a number of smaller tutorials guiding you through other aspects of the game as they are unlocked. This will ensure that you understand the basics of crafting, trading, enacting Policies, and more! Of course, this will be an option that experienced players can turn off if they already know what they’re doing. 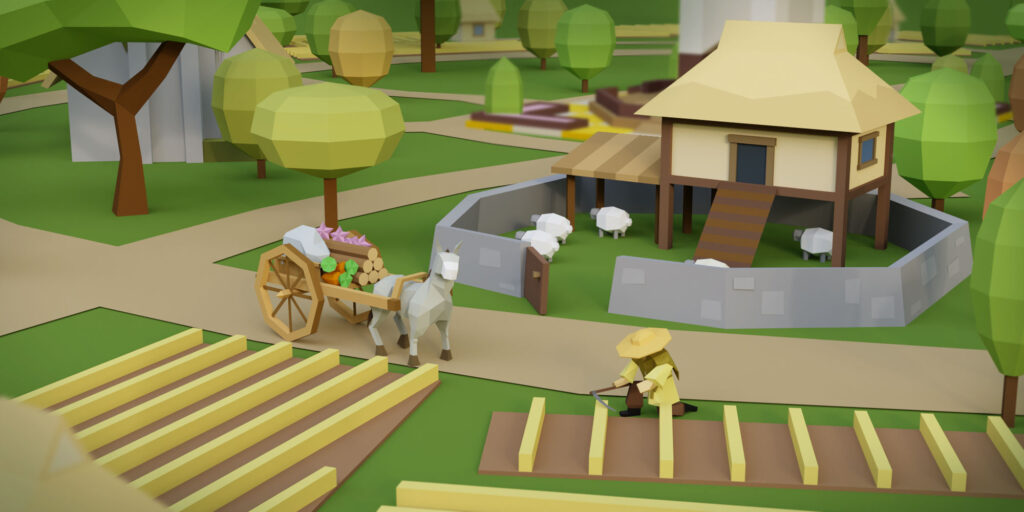 Everything in CryptoCrusades depends upon resources, the fuel of your Empire. Resources can be obtained in a few different ways, most directly by Harvesting the tiles surrounding a Settlement. This can be done by tapping the Harvest button in the upper left corner of the Empire map.

The amount of each resources that you get from Harvests depends on the surrounding tiles. Gathering resources takes time, so it’s advised that you gather resources from each Settlement about 1-2 times each day. There’s a maximum amount of resources your Settlements can Harvest at once, so making a habit of Harvesting in a timely manner can maximize the amount you get!

Everything that can be done in CryptoCrusades runs through your buildings. A core component of progressing through the game and making your Empire even stronger is by upgrading these buildings. This is also the key to unlocking other buildings and thus more gameplay features.

Upgrading buildings costs resources and time. While early upgrades go fairly quickly, the resource costs are scaled to make sure that you don’t get ahead of yourself early on. You can see the benefits earned from upgrading a building beforehand, so you can decide for yourself when it makes sense to upgrade which building. 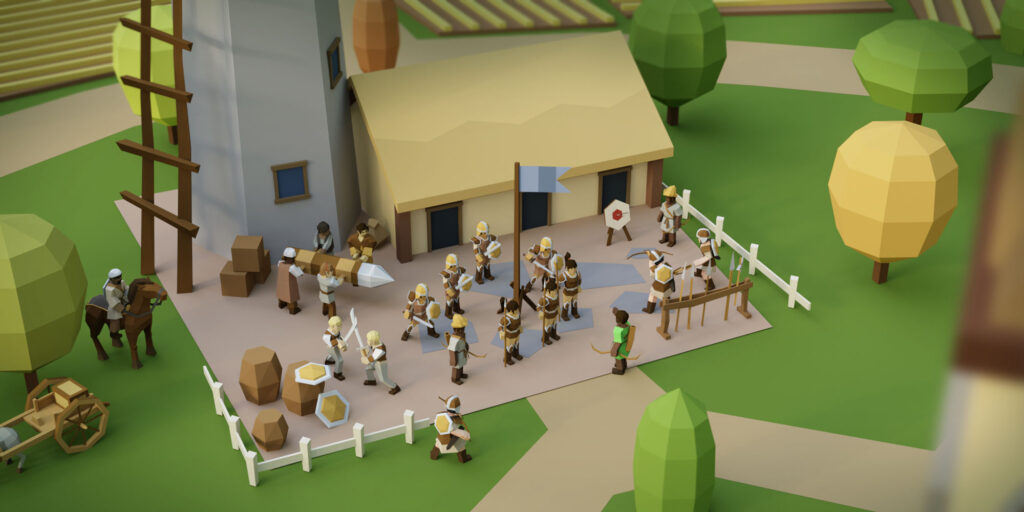 As the leader of an Empire, it is your job to make sure your territory is defended and that you have standing armies to expand it. This is done by recruiting Units from the Barracks and putting together fighting forces with different strengths for different purposes. While some Units are available at the Barracks from the beginning, there are others that are locked behind Policies.

In addition to other resources, Metal is essential for recruitment. Building an army is highly reliant on both your Barracks as well as your Workshop. Upgrading the Barracks allows you to house more Units throughout your Empire, and upgrading the Workshop increases your capacity for smelting the ever-precious Metal needed to recruit more Units.

If there is ever a reason to free up space in your Barracks, there is always the option of Disbanding your Units. Disbanding a Unit removes them from your Empire, freeing up the Unit Capacity that it was taking up previously. This is an important tool to keep in mind for players who want to change up their strategies with different Unit configurations.

The strategy of CryptoCrusades really hits home on the field of battle! With ready armies of Units willing to fight to the last, players can send out Attack Missions to the Settlements of others to battle, pillage, and destroy. With many different options at your disposal, putting together the right army for an attack can make the difference between victory and crushing defeat.

When assembling Units to send out for an attack, first consider your options. At the beginning of the game, you will only be able to send out Thieve Missions where Units will steal resources upon a successful attack. After unlocking different Policies, you will also be able to capture enemy Towns with Conquer Missions or burn them to the ground through Raze Missions. The success of these Missions depend on which Units you assemble and how you play their strengths against the weaknesses of your enemy. 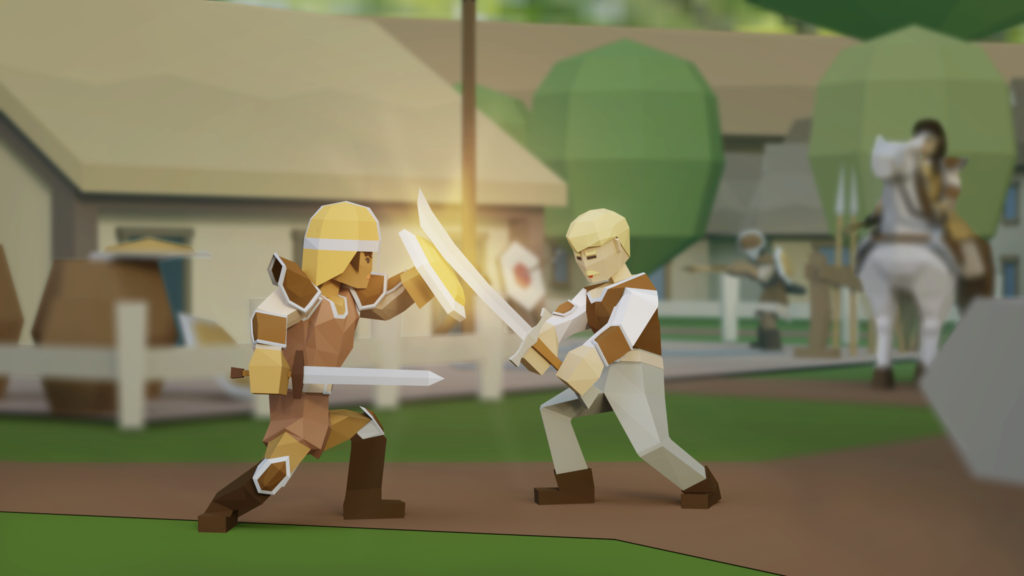 For example, if you want to make the most of a Thieve Mission, make sure that your army contains a few Wagons as they have the high Loot Capacity. Additionally, you’ll want to bring along some Units with high armor ratings to soak up damage, like Sword Infantry or Heavy Cavalry. In fact, both types of Cavalry make ideal options for Thieve Missions, both for their high Loot Capacity as well as the extra damage that Light Cavalry visit upon Ranged Units.

Effort and engagement is something that makes a game rewarding for players, especially if there are progress-based tasks to take on! After getting used to the basics of harvesting, fighting, and upgrading Buildings, players can pursue Quests in order to receive generous rewards. These may take the form of resources, Units, or even NFTs!

Quests are certain tasks or goals that players can complete in order to receive rewards. They can be accessed from the main menu of the tablet next to “Empire”. In addition to Main Quests that are divided up by focus (Military, Economic, and Development), there are also Daily Quests that refresh once every 24 hours. Completing a Main Quest will unlock the Quest’s next tier level, with greater requirements and even greater rewards. 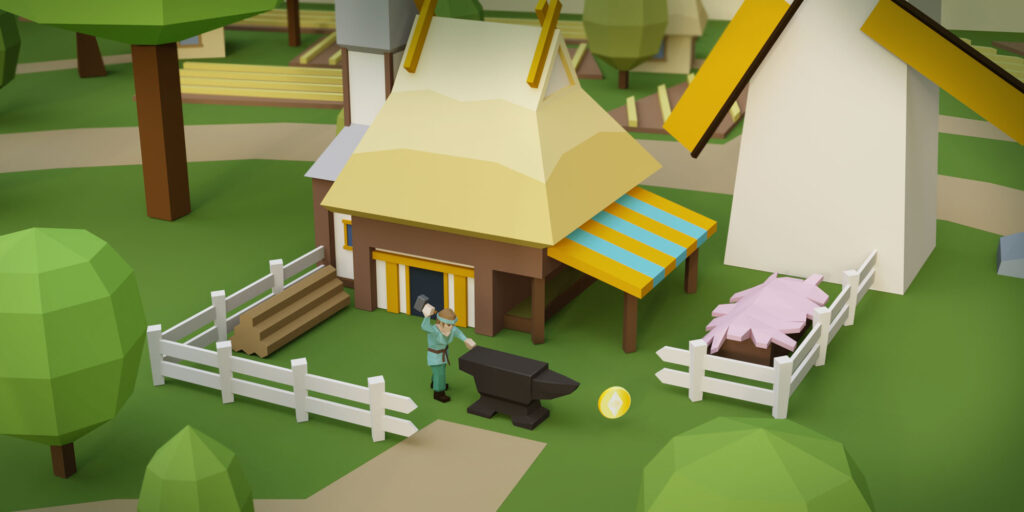 As a game built on a blockchain, CryptoCrusades makes use of several NFT assets in its crafting system. Cosmetic NFTs are crafted in the Workshop located in your Capital City. While they are for in-game use, they are fully owned by the players themselves. This gives players the freedom to customize the appearance of their Units as well as their Buildings.

Once your Barracks reaches Lv. 2, you’ll be able to build the Workshop. To craft Cosmetics, you must first collect NFT ingredients called Trinkets. Trinkets can be obtained from the in-game Shop and come in many different types, from Materials to Paints. Then, you can combine them for a nominal amount of Gold and Inspiration to craft a Cosmetic.

Once crafted, Cosmetics can be used in a number of different ways. While you can obviously equip them to change the look of your Empire, they can also be traded with other players at the Market for resources, Gold, and more. This gives players more ownership and autonomy over how the in-game economy develops and how they participate with it.

Trading allows players to grow the wealth of their Empire, as well as their personal wealth, through means other than warfare. With the help of trusty Caravans, you can trade any of the five primary resources, as well as eventually Gold and NFTs, through the Market in your Capital City. Even the warlords of CryptoCrusades can appreciate the allure of a good deal! 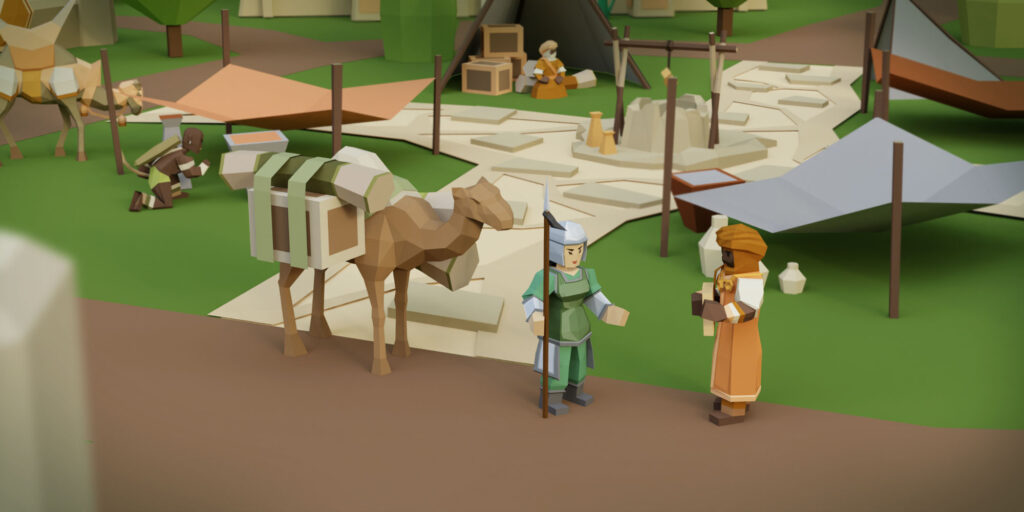 Conducting trades takes time as the Caravans have to move from one Capital City to the other. The amount of time these journeys take can range from 5 minutes to 23 hours. The Market has a limited amount of Caravans that can make trades at any time, and the amount of resources that can be can carried by each Caravan is also limited. As your Market is upgraded, you’ll be able to send out more Caravans with higher Caravan Capacities.

Gold is a currency used in CryptoCrusades for a myriad of different purposes. Though it is a crucial resource for later in the game, it is mostly absent from the early game stages as it relates mostly to advanced gameplay functions. It can be gathered by players from different sources as well as purchased from the Shop.

Before an Empire is able to gather its own Gold, players must first build Banks after their Markets reach Lv. 7. From there, Gold can be collected as Tariffs from different actions, such as Harvesting resources, successful Thieve Missions, and making trades at the Market. Only a certain amount of Tariffs can be stored in the Bank’s Vault at once, so each time a player produces Tariffs, the Gold must be collected manually before more Tariffs can be collected.

In order to properly manage a large Empire like the one you might build in CryptoCrusades, it is crucial to enact Policies that guide its development. Policies cover a wide range of bonuses that can do everything from unlock new units, enable the construction of Town Buildings, and even increase the overall resource yields from Harvests. Available only to more experienced players, the way you implement Policies can make or break your Empire!

Policies become available once the City Hall has been built. In order to do this, a player must first have a Lv. 8 Bank to ensure that there is enough Gold to enact Policies. This is because Gold must be deposited into the City Hall’s Treasury, which allows players to earn Policy Points once the Treasury has a certain amount of Gold stored within.

Enacting Policies requires spending Policy Points as well as a substantial amount of resources. Once the Policy is enacted, it will go into effect across the Empire. Due to the value of Policy Points, Policies can be rescinded when they are no longer useful, allowing the player to reclaim and redistribute their Policy Points. 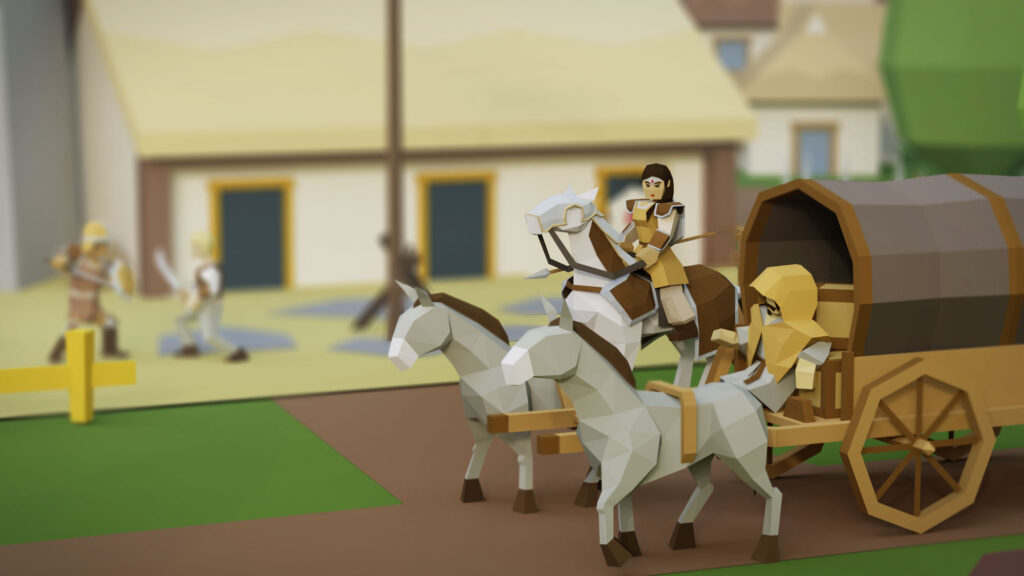 In the grand scheme of grand strategy, no goal is more important than taking your Empire and making it the biggest it can be. Once your Capital City has gotten to a steady stage of development, it might make sense for you to expand your Empire and spread your influence over the world. There are a couple of ways to do this, whether through peaceful means or through aggression.

The first way is to Settle a new Town yourself with the help of a Settler. Settlers can be recruited at the Barracks and sent out with an army to protect the new Settlement once it’s built. After establishing the Town, you will be able to Harvest resources, recruit Units, and more! When looking for a new location, it might be a good idea to send your Settler where you can obtain resources that are scarce around your Capital City.

For the more military-minded players, the gates to expansion are unlocked after enacting the Conquest Policy. This allows you to send out armies to attack enemy Towns in the hopes that your force can overwhelm theirs and take the Towns for yourself. Just remember to take along a Settler in the army, otherwise you won’t be able to set up shop after the battle!

There’s a lot more to CryptoCrusades than what you see here in this guide. If you want to learn more about anything you’ve read about in detail, we suggest you check out the CryptoCrusades Fandom Wiki (cryptocrusades.fandom.com/wiki/CryptoCrusades_Wiki). The game is continuously evolving, and we hope that there will be more awesome content to catch you up on in the coming months!

Building an Army in CryptoCrusades